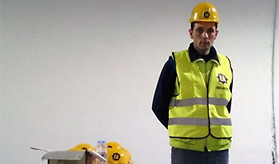 STEEL FIXER AMEL ŠKULJ: WE BUILT THIS TUNNEL WITH OUR HEARTS!

SUCCESS OF BOSNIAN-HERZEGOVINIAN BUILDERS:
Steel fixer Amel Škulj: We built this tunnel with our hearts!

Steel fixer Amer Škulj from Kakanj, an employee of Euro-Asfalt, was among the 300 workers who have spent the last two years working around the clock building the most challenging tunnel on the 5c Corridor motorway between Sarajevo and Zenica. Although it seems unbelievable nowadays, Škulj claims that he did not work solely to earn a salary. He did it for his people and his country. And he was overjoyed today, at the finishing ceremony of the second stage of constructions.

“What can I say, I am thrilled. To me this tunnel is not just a structure, it has become a part of my country and my people,” Škulj told the BiH-based news agency Patria (NAP).

Amel feels proud to have been a member of a team which, in his words, jumped at the opportunity to help their country when the fate of this important corridor was hanging in the balance. Before the FBiH Government decided to entrust this project to domestic ones, as many as two Slovenian construction companies tried and failed in completing this strategically important tunnel.

Today, at the closing ceremony for the second and most challenging stage, everyone was proud of their engineering marvel – from the contractors’ CEOs to the FBiH Prime Minister, Nermin Nikšić. But the tunnel appears to have left the strongest mark in the hearts of ordinary workers.
“This is a tough and dangerous job. But when you are surrounded by good colleagues, nothing presents a challenge. I always came here and left with a full heart. I was not working here just to earn a salary. I was here to make a contribution to my country,” Amel told NAP. He proudly added that he built a part of himself into the tunnel.
“I worked in Slovenia for a few years, but it’s not the same. Over there, you work for a wage, for somebody else. Here, you work for yourself, for your country, and for your own people,” Amel said, adding that he would like to see more projects like this one in BiH, and therefore more jobs for his unemployed friends.
Source: depo.ba