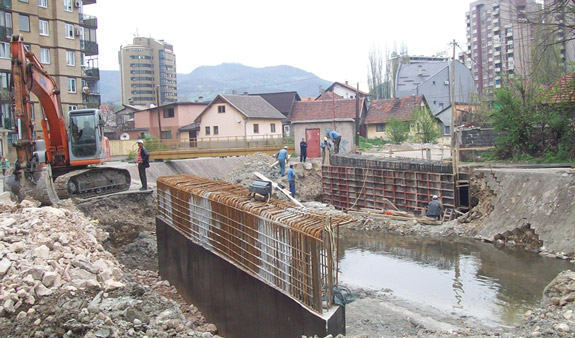 CONSTRUCTION BEGINS ON THE PRIMARY URBAN THOROUGHFARE IN ZENICA

A ceremony marking the official beginning of a multi-million investment project, the Stage 1 of the Primary Urban Thoroughfare (Glavna gradska magistrala – GGM), was held in Zenica. The 3.2-kilometre road will be built by a consortium led by Euro-Asfalt Sarajevo. The estimated cost of the first stage is 23 million KM. The time for completion is 24 to 26 months.

Head of Zenica Municipality Husejn Smajlović, who inaugurated the project together with High Representative Valentin Inzko, stated that this project will provide Zenica with jobs and new perspectives for the local construction industry. GGM will be 7.8 kilometres long in total (3.2 kilometres of urban thoroughfare, 4.6 kilometres of suburban road).

The construction will be divided into two stages. The main purpose of this longitudinal urban/suburban thoroughfare is to improve the traffic flow and connect the primary and secondary street networks with the 5c Corridor motorway (via the M-17 A-level road), and with other road networks via regional roads R-441 and R-445. The project will provide Zenica with a four-lane road divided by a central reservation, two roundabouts, around a dozen crossings, footways and road furniture. Apart from Euro-Asfalt, the remaining five members of the consortium are Bosnian-Herzegovinian companies Jata Srebrenik, GP Put Sarajevo, Almy-Transport Zenica, Deling Tuzla, and ŽGP Sarajevo.