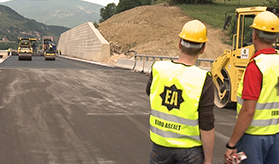 Completed projects in Bosnia and Herzegovina

The overall length of the future Pan-European Corridor 5c through BiH is 336 kilometres, of which 285 kilometres are located in the Federation of BiH, and 51 kilometres in the RS. Euro-Asfalt carried out six construction projects in Bosnia and Herzegovina in 2014, five of which were sections of the 5c Corridor motorway.

Euro-Asfalt was engaged in the construction of subsections Suhodol-Tarčin, Vlakovo Lepenica and Lepenica-Suhodol, which are part of the 19.8 kilometres long section Vlakovo-Tarčin. The project envisioned the construction of the motorway, junctions Vlakovo and Lepenica, along with underpasses, flyovers and hydro-technical installations, as well as toll stations Vlakovo and Lepenica. All three subsections were completed according to schedule, thanks to the dedication of our management, our workers, engineers and consultants, as well as the state-of-the-art heavy equipment owned by Euro-Asfalt.

The greatest engineering feat – the Stage 1 (tunnel excavation and setting-up of primary formwork) of the longest tunnel built in recent history not only in BiH, but in the entire Southeast European region – was completed by Euro-Asfalt and its consortium partners on the Independence Day of Bosnia and Herzegovina, the 1st of March 2013. The time for completion of the first stage was 33 months.

The second stage, which included the construction of secondary lining, was completed in record time. We used the newest sliding metal formwork. With three such forms we were able to line 12 metres of concrete per day. The practically record-breaking monthly progress was around 1,000 metres. The entire second stage was completed in six months. The “1st of March” Tunnel consists of two tubes 2,949 metres and 2,914 metres in length. It is equipped with state-of-the-art technology, including video surveillance, internet connection, fire alarm systems and tunnel road accessories.

Project LOT3A, also known as the Sarajevo Bypass, is located north-west of Sarajevo in the Bosna river valley. The bypass is conceived as a motorway with two carriageways separated by a central reservation. Each of the carriageways consists of a driving lane, a passing lane, and an emergency stopping lane. The 3.3 kilometres long subsection of the Sarajevo Bypass between Butila and Vlakovo was completed on schedule. This segment of the motorway included the Bojnik Viaduct, which lies entirely on the motorway course, and two underpasses, Osijek and Treševine.

Euro-Asfalt was also engaged in the reconstruction and expansion of the Stup Junction. Prior to the involvement of our renowned company, this junction was widely known as the main bottleneck forcing drivers to waste their valuable time stuck in traffic.

A new carriageway had to be built together with two additional slip roads. The city’s primary longitudinal road was widened to include new footways and a new bike lane. New underground pedestrian crossings with exits towards tram stations were built to increase the safety of pedestrians. The existing road bridge was reconstructed.