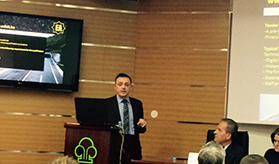 Head of the Euro-Asfalt International Projects Department Edmir Eminović stated that the survival and growth of the regional building industry depends on flexible national policies, specialization of construction companies, and the creation of consortiums for a stronger impact in the market.

A regional Western Balkans conference was held in Sarajevo, with the key topic being: “Public procurements as the main strategic function of good management.” Representatives of the construction company Euro-Asfalt from Bosnia and Herzegovina also took part in the conference.

Speaking at the panel session “How to organize regional companies to maximize bidding potential in the region and the impact in third markets,” Eminovic mentioned some of the challenges and possible ways to overcome them when it comes to public procurement procedures in the region and in foreign markets. According to him, the factors identified as obstacles in regional tender procedures include bid bonds, references, well-versed and experienced staff, as well as formal procedures.

“There are certain conditions that must be met by companies from Slovenia, Serbia, Croatia, BiH, Macedonia, Montenegro and Kosovo to become competitive in large-scale regional and international biddings. These include bid bonds, equipment, expert staff and workers able to meet the investors’ demands and bidding conditions. I will highlight the factors that are bringing this region closer. These include a common or similar language, legislation that has resulted from former Yugoslav laws, as well as the particular links between individual countries of the region and large global markets, namely Serbia’s ties with the former USSR, BiH’s ties with the Islamic world, Croatian and Slovenian ties with the EU countries,” Eminović explained.

The regional Western Balkans conference was organized by the Foreign Trade Chamber of Bosnia and Herzegovina.