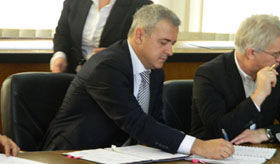 Turkish company Cengiz Insaat will be tasked to construct another 10.1 kilometres of motorways in Bosnia and Herzegovina between Vlakovo and Lepenica. This way the company will be in charge of the entire 20-kilometre Vlakovo-Tarčin section, which is already under construction and should be opened by the autumn of 2014.

The construction agreement worth more than 350 million KM was signed today at the FBiH Government building by the FBiH Motorways CEO, Ensad Karić, and the CEO of Cengiz Insaat, Kemal Unluer. The time for completion of the project is 20 months. According to Karić, one of the most positive aspects of this agreement is the fact that seven companies from BiH will be engaged as partners to the Turkish company Cengiz. Domestic companies will have the opportunity to work on a project worth 200 million KM. This is so far the highest amount for a 5c Corridor motorway construction contract, as well as the most expensive construction project entrusted to domestic companies.

With the signing of this agreement, Karić said, the total value of ongoing motorway projects has reached 472 million euros. 36 kilometres of motorways are currently under construction in seven building sites. The remaining two biddings (Stage 2 of the Vijenac tunnel and the Svilaj-Odžak section) are still short by about 90 million euros. The FBiH Motorways are currently working on securing the remaining 307 million euros for completing the ongoing construction projects, and reaching 100 kilometres of completed motorways by 2014.

Unluer stated that his company has so far completed 15% of construction works on the Vlakovo-Tarčin section, which should be seen as an achievement having in mind the official starting date of the project, as well as the speed with which the preparations were completed.