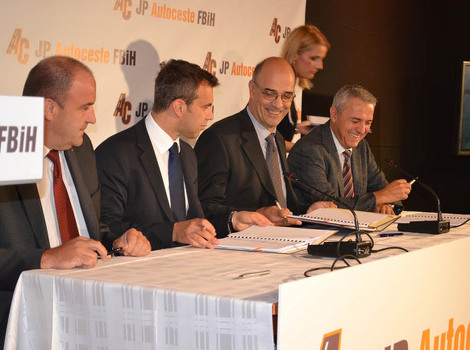 An agreement on the construction of the 11-kilometre 5c Corridor motorway section Svilaj-Odžak was signed in Odžak by CEO of FBiH Motorways Ensad Karić as the investor, Regional Head of Strabag AG Austria Josip Kuzmanić as the consortium leader, FBiH Minister of Transport and Communications Enver Bijedić as a co-signatory, and Euro-Asfalt CEO Hamed Ramić on behalf of his company and ŽGP Ltd. Sarajevo as contractors. This will mark the opening of the eighth building site on the 5c Corridor, and the first one in the northern part of the country.

“With this agreement we shall be 11 kilometres closer to our aim, which is to have more than 100 kilometres of modern motorways by the end of 2014,” Karić said.

According to him, aside from 61 million euros envisioned for the 11-kilometre motorway, another 10 million euros will be invested in the international border crossing at Svilaj, similar to the one at Bijača in the south of the country, as well as two junctions, Svilaj and Odžak.

“It is very important to FBiH Motorways that, apart from 11 kilometres of modern motorways, the local communities will also gain six kilometres of access and local roads,” Karić said, adding that 300 workers and about 300 pieces of heavy equipment will be employed on this project.

On behalf of the consortium of Strabag AG Austria, Euro-Asfalt Sarajevo, and ŽGP Sarajevo, Josip Kuzmanić stated that the companies will invest their full energy and potential into this project, taking special care to meet the deadlines.

“I wish to emphasize that Strabag employs domestic workers in BiH, because we have been present here as a Bosnian-Herzegovinian company for years,” Kuzmanić said.
Source: klix.ba