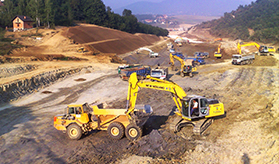 The motorway course of the LOT3A continues where the LOT1 (Jošanica-Butila) leaves off, just behind the Butila Junction. It stretches south-west for 3.5 kilometres towards the future Vlakovo Junction. The starting chainage km 5+500.00 overlaps with the final chainage of LOT1. The course of the LOT3A road follows a previously set corridor bordered by the Dobroševići-Bojnik urban planning area on the right side, and the future railway corridor on the left side.

The advantage of this course over the previous proposals is that the existing thoroughfare serving as the primary link between the city and these two neighbourhoods will practically remain intact thanks to favourable grading of the Bojnik Viaduct (L=115m) as an integral part of the motorway course.

Works have been proceeding along the entire course of the LOT3A since the beginning. The cutting of building material is nearing completion, with about 80,000 cubic metres left. The embankment filling is also advancing, with 200,000 cubic metres left. The cutting and filling should be completed by the 15th of October, 2013. Other ongoing works include the construction of Bojnik Viaduct and Osijek underpass, and preparations for the construction of Treševine underpass. The installation of box culverts is nearing completion. Four culverts have been completed, and the remaining three are nearing completion.

The Treševine cut and the reinforcement of the fill slope should be finished by the end of September. The slope reinforcements are made with coir mats and resoiling. Works are also under way to resolve any overlapping of low, medium and high-voltage power lines, as well as water pipes and cable ducts.

Preparations are under way for the construction of drainage systems and the upper layers of the motorway between cross-sections P274 and P297. The paving of this section of the motorway should be completed by the end of October.