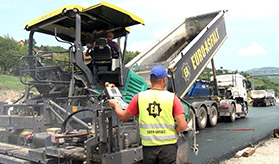 A consortium of BiH companies, consisting of Euro-Asfalt and ŽGP, has been selected as the best bidder for the construction of sections 2A and 2B of the Sarajevo Bypass.

According to Euro-Asfalt’s Executive Design, Technology and Organisation Officer, engineer Munir Ramić, the 2A section envisions the construction of the Briješće Viaduct, demolition and replacement of the existing M17 flyover in Briješće, as well as Briješće roundabout.

Ramić explained that the project will also include reconstruction of several access roads. The construction of section 2B will involve the paving of the surface layer between the Stup Junction and Briješće roundabout. The total cost of both sections amounts to 23,300,000 KM, VAT included.

“The completion of this project will alleviate traffic congestion that has been haunting this section of the M17 road, between Jošanica and Stup junctions, for many years. It will also mark the completion of the entire Sarajevo Bypass. The consortium leader, Euro-Asfalt, and its partners will undertake all available technical and organisational measures to reduce traffic obstructions as much as possible during the construction,” Ramić said, adding that this construction project will exclusively employ domestic companies.

The time for completion of the project is 11 months. The construction will begin as soon as the consortium led by Euro-Asfalt is granted site possession.